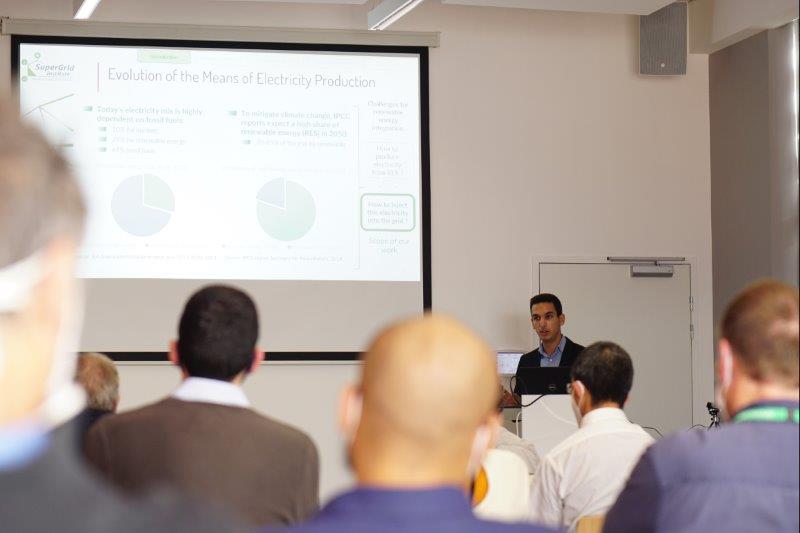 The recent engagements of many national governments backed by the United Nations push for introducing more and more renewable energy in the power systems in an attempt to mitigate global warming. Most of the renewable sources other than hydro power, such as wind turbines (except directly connected) or solar PV systems, depend on Power Electronics (PE) converters for their interconnection with the grid. Thus, the PE-based sources are becoming more and more prevalent in the current power systems and bring brand-new features in the grid. We observe this tendency both at the distribution level where the decentralized production units such as residential solar PV are gaining popularity, and at the transmission level as well where large energy sources such as Offshore Wind Farms (OWF) start to be interconnected with the grid using High-Voltage Direct Current (HVDC) technology.

This PhD thesis addresses some of the future grid challenges of replacing existing Synchronous Generators (SG) by PE-based interfaces and focuses more specifically on Voltage Source Converters (VSC) and their associate control strategies. This work focuses on the transmission grid level and investigates the control of VSCs interfacing renewable sources in hybrid power systems where PE and SG coexist.

In the first part of the work, the different ancillary services provided by SGs are listed and an overview of the existing VSC-based solutions is given, including the so-called grid-following and grid-forming controls. These two approaches are compared in terms of performances and constraints. Next, these types of controls are studied regarding the maximum allowable limit of PE and their interactions with nearby SGs in hybrid systems. It was shown that switching the VSC control mode from grid-following to grid-forming mode can allow a higher penetration rate of PE-based sources, even though some interactions with the remaining SGs must be taken care of.

In the second part of this work, we focus on the application of grid-forming control to Modular Multilevel Converters (MMC) for the integration of OWF in AC grids. The impacts of the DC-grid dynamics on the behavior of the grid-forming controlled MMC are assessed when the station must ensure the stability of the DC grid at the same time. In this context, a method is also proposed to estimate the energy requirements of the MMC submodules to provide AC-grid related synthetic inertia. The corresponding control proposed is compatible with the state-of-the-art grid-forming control and is validated by simulations in a multi-machine system. To complement, a control solution that enhances the AC/DC support of such stations based on a MIMO-oriented Model Predictive Control (MPC) is proposed. It shows a better handling of the MMC internal energy as well as robustness against parameter uncertainties when compared to the existing SISO-based dual PI structure that relies on a theoretical decoupling between the AC and DC dynamics.

Finally, the proposed MPC-based control is applied to a real MMC. It is validated using an experimental setup which involves a mockup of an MMC of 6 kVA and 60 submodules. The grid-forming control and the proposed MPC are implemented into an Opal RT target and tested with success in real-time conditions to validate the approach developed in this thesis.