A complete view of DC-DC converters for HVDC: CIGRE Technical Brochure 827 published with significant input from the SuperGrid Institute team

Several members of the SuperGrid Institute team were heavily involved in producing the CIGRE Technical Brochure 827 on DC-DC converters for HVDC grids which has just been published after 4 years of work. It is the first collaborative technical brochure to be produced on this topic, which represents a major milestone for the development of HVDC grids.

The technical brochure presents a comprehensive evaluation of the feasibility of DC-DC converters for applications within high voltage DC transmission grids. It elaborates on the motivations and applications of DC-DC converters, and describes design, modelling, control and performance in normal DC grid operation and under DC faults.

In total, more than 30 members from 20 industrial and academic institutions co-wrote the technical brochure, including SuperGrid Institute’s Piotr Dworakowski who led the chapter on design and modelling. Juan Paez, research engineer at SuperGrid Institute, and Jose Maneiro (a former colleague) also made significant contributions to the brochure, adding their expertise to many of the other chapters in addition to the one led by Piotr. We would like to congratulate them for the excellent work they have accomplished!

The aim of the working group responsible for the brochure was to collect and structure a complete overview of this technology and come to a collective agreement on the fundamental concepts for DC-DC power conversion in HVDC grids; bringing the technology one step closer to reality and providing a basis for future standardisation principles.

The technical brochure identifies two distinct topologies of DC-DC converters for HVDC grids as the most feasible solutions for the future of this technology. These are isolated DC-DC, rated 600 MW, ±400 kV/±200 kV and non-isolated DC-DC, rated 600 MW, 400 kV/398 kV. The modeling of the converters was presented in the brochure and two simulation models of the designs were produced using PSCAD software. In addition to the technical brochure and the two simulation models which are available on the CIGRE website, SuperGrid Institute has made two other notable scientific contributions: one article on “Case Study of Non-Isolated MMC DC-DC Converter in HVDC Grids”, co-authored by Piotr Dworakowski, and a second which has been submitted to CIGRE Session 2022.

A step towards HVDC grids

The CIGRE Technical Brochure 827 is a significant document, backed by the weight of worldwide experts who state that DC-DC converters for HVDC grids is a feasible technology. The remaining challenges that need to be addressed are outlined in the brochure. Armed with this information, it is hoped that power system operators will see DC-DC converters as a tangible solution for their HVDC grids and connections in the future.

For SuperGrid Institute, our involvement in this working group has given us a valuable opportunity to share our expertise in this area, having already been focused on developing this technology for several years, and to become more active in the technical community. Over the 4 years of the project we have developed close working relationships with our fellow working group members, and were even lucky enough to host one of the 6 working group meetings that took place in person. 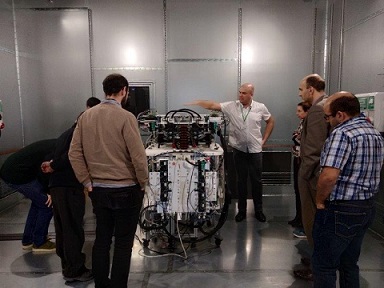 We are looking forward to working further on the subject, be it via new collaborative projects, feasibility studies or providing technical support, with the aim of increasing the technology readiness level of DC-DC converters for HVDC grids and facilitating their deployment in grids around the world.