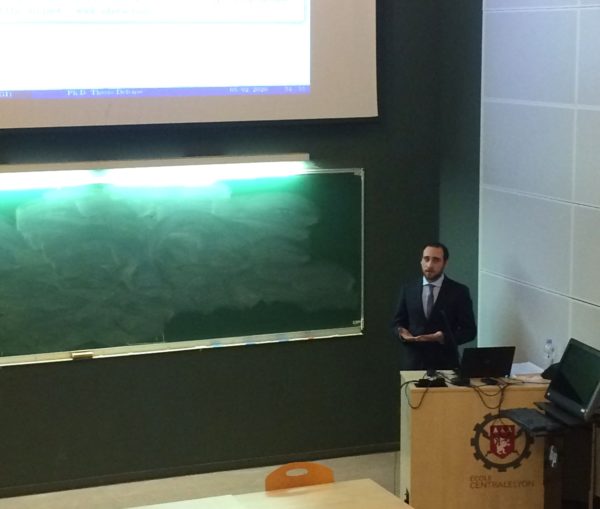 Electric networks represent one of the key element of industrialized society’s wellness. Their main role is to bring connection between electric power production and consumption sites, providing well specified standards of quality, safety and security. Atmospheric phenomena such as rainfall, lightning strikes and strong winds may provoke severe accidents to the electricity transport equipment, leading to service deficiencies. To protect the electricity transport infrastructure from such anomalies, the interruption of faults currents is required. This task is assigned to devices known as circuit breakers. In these kind of switchgears, the mechanical disconnection of electricity conductor parts is realized to interrupt the current passage. The electrical breakdown of the medium in which such contacts are immersed, occurs when the voltage is sufficiently high. The generation of an electric arc causes the current to flow between the two contacts. Specific measures have to be adopted in order to confine and extinguish the electric arc, for a definitive interruption of the current passage.

Nowadays, in AC transmission grids, the fault current interrupting technologies are based on the use of the SF6 (sulfur hexafluoride). SF6 is harmful for the environment because of its high Global Warming Potential. Ongoing researches within SuperGrid Institute aim at proposing alternative interruption technologies not using SF6. Unfortunately, replacing SF6 with environment friendly gases worsens the current interruption process: their physical properties being not sufficient to ensure the same performances observed when SF6 is employed. A possible way to overcome this limitation is to enhance clean gases properties by adding some chemical species. In the framework of the research activities of the High Voltage Substation Equipment program of SuperGrid, it has been proposed to introduce such species by means of an evaporative liquid spray. The interaction between injected droplets and the mixture of hot gases successively flowing into the chamber and vented outside the chamber during the mechanical separation of the electric contacts should allow spray evaporation and transport of the modified gas mixture towards the arc region.

The thesis work complements experimental studies performed at SuperGrid Institute regarding this liquid spray injection strategy. Its key objective is the development and application of a numerical simulation strategy for the device which allows to quantify the vapor produced by spray evaporation and to guide the design choices of a chamber with spray.

The simulation tool developed in the thesis is built on an Eulerian-Lagrangian description of the interaction between the gas mixture and the spray. The standard Abramzon & Sirignano’s model available in the CFD code used for the study is applied to describe the evaporating spray once validated on a reference experiment taken from the literature. The thermophysical properties of the gas mixture are described using sets of tabulated values. A consistent interpolation strategy is developed to ensure the calculation of states satisfying the second principle of thermodynamics.

The URANS simulation of the unsteady flow in the expansion chamber is validated by comparison with a pressure measurement performed on the test-rig. The coupling with the spray model allows to quantify the amount of vapor produced and transported outside the expansion chamber. The computational loop is applied to the assessment of some design options (starting injection time, injector location, spray characteristics).