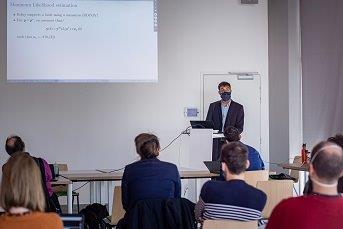 The protection of meshed HVDC grids comprises many locks, among which the reliable and fast identification of faults affecting the lines of the grid is seen as particularly challenging. The present thesis investigates the concept of a single-ended fault identification algorithm based on the estimation of the fault parameters. A closed-form model of the transient evolution of the voltage and current in a faulty line is first developed. The obtained model depends explicitly on the fault parameters (e.g. the fault distance and resistance) and is thus adaptable to various fault cases. When a fault is suspected at a relay protecting one of the transmission lines, the proposed algorithm estimates the unknown fault parameters based on the received measurements and the developed model. The result of the parameter estimation process allows the relay to confirm or reject that the protected faulty line is faulty or not. In particular, a confidence indicator is employed to evaluate the accuracy of the estimated fault parameters. The proposed method is tested on a 4 station meshed grid based on overhead lines, implemented in Electro-Magnetic Transient software. Contrary to most existing approaches, the presence of DC reactors at the extremity of each lines is not required for the algorithm to distinguish between faults occurring on different transmission lines. The proposed approach is able to identify most of the faults while using a short observation window (less than 0.5 ms long). The fault identification algorithm is thus a good candidate to be used in a selective fault clearing strategy, where each elements of the grid is protected individually. The compliance of the approach with system requirements such as the DC circuit breakers and the sensor specifications is also investigated.