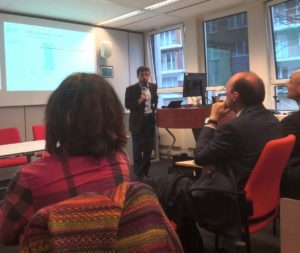 This Tuesday the 4th of February, at the European Commission’s Directorate General for Energy, Bruno Luscan, CTO of SuperGrid Institute, presented the company’s vision on the importance of the role of HVDC links within AC/DC networks. The presentation was given during the “Horizon 2050 power system and the role of HVDC technologies in a highly decentralised RES generation” workshop in Brussels.

The increased portion of energy from renewable resources integrated into the power grids means that the network’s configuration is changing, implying the need to adapt its capability for this integration, its operation and control. SuperGrid Institute believes that HVDC and in particular multi-terminal architectures (MTDC) will play a key role in addressing power flow challenges and stability issues in the future.

The discussions during the day and following Bruno’s presentation were very constructive and revealed that the topic of HVDC and MTDC is a high priority for the European Commission. Many of the participants at the workshop agree with this vision; an encouraging confirmation of the importance of SuperGrid Institute’s work.