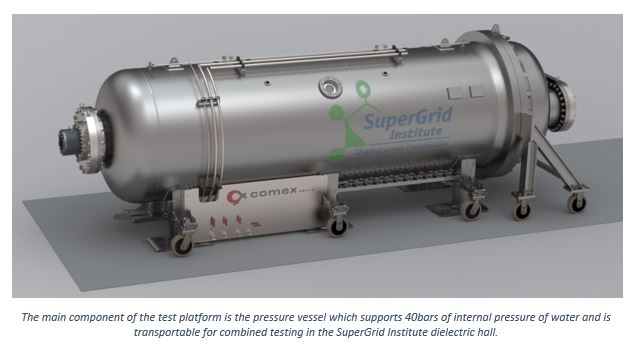 Since 2016, SuperGrid Institute’s program 4 has intensely worked on the specification of a test platform with the capability to go up to 40bars of internal pressure and validate subsea node, a SuperGrid Institute concept for offshore meshed networks. Beside its imposing size, the particularity of this platform is that it allows combined testing functions on subsea high-voltage cable systems including water pressure, dielectric stress and thermal cycles. This means that multiple cables shall be passed through the partition of the vessel to create the electrical circuit test.

International standards such as IEC61886 are considered to be the foundation upon which these tests are designed. As many of the trials that will be carried out by SuperGrid Institute concern new technologies, they will not fit into an existing standards of testing. Performing these tests guarantees that the electrical performance and the mechanical integrity of the design are conform to the product specifications. Water leakage, dielectric or mechanical degradation would lead to non-conformant result of the test.

SuperGrid Institute, in 2017, commissioned Comex (Compagnie Maritime d’Expertise) to manufacture this vessel and integrate the pressure related components. Comex, the historical company specialized in hyperbaric testing facilities and deep sea operations has designed and will manufacture the testing platform.

In December 2017, SuperGrid Institute and Comex successfully validated the cable feedthrough concept using a vessel available on the manufacturer’s site.